Healthabitat loves seeing simple and effective solutions to improving people’s health. HH says bravo to the Clean Warm House project in Peru which uses simple passive design interventions to reduce respiratory illness and pneumonia. This project was carried out in extreme climates that get down to -20 °C in the Peruvian Andes. 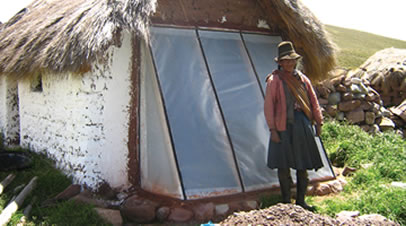 The project converts a wall of an existing adobe (earth) house into a trombe wall to raise the internal temperature of the house. A trombe wall uses glass or plastic to trap heat next to a wall with high thermal mass (such as adobe, brick, concrete, etc). In this case, the polycarbonate panels are added to the outside of an existing adobe wall which creates an air space that traps the hot air that is heated through the polycarbonate. Vents at the top of the adobe wall are opened during the day to allow hot air to rise and flow into the interior of the house, whilst vents at the bottom are opened to allow cold air to pass from the house into the air space to heat up. The adobe wall is painted black to better absorb the heat from the air space during the day, which then radiates this heat back into the house at night. Roof insulation is also installed to limit heat loss from inside the house. 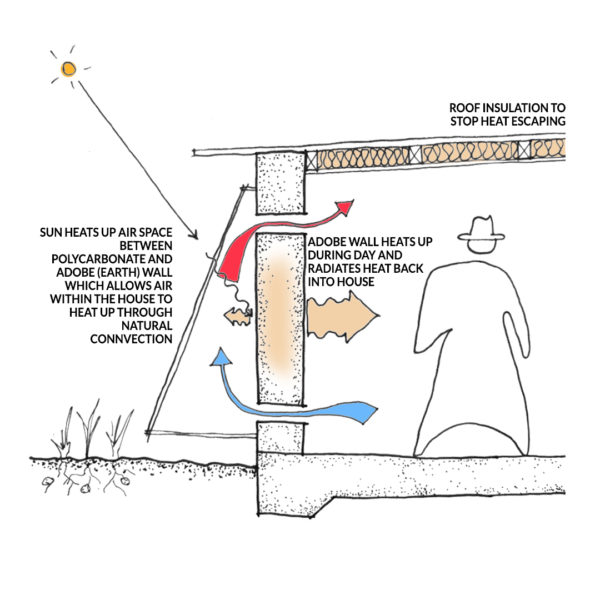 The basic principle of the trombe wall uses the suns heat to heat up a space next to a wall that can store the heat (earth) and allow air to cycle through the heating space to make a house warmer.

From the Guardian article;

Over the past three years, Peru’s development ministry has installed 7,436 thermal homes in 13 regions across the southern Andes at an average cost of 10,900 Peruvian soles (£2,431) each, according to official figures.

“We focused on homes where there are children principally to protect them from pneumonia and other respiratory infections,” Patricia Balbuena, Peru’s vice-minister for development, told the Guardian. In these remote areas, pneumonia can be fatal for the old and very young particularly if they are malnourished or anaemic.

Initial health statistics indicate respiratory illnesses have been reduced by 20-30% using the simple technology, says Jorge Soria, head of the Warm Houses project at the university.

Houses that incorporate passive design features require less days of active heating and cooling and less energy is required to heat or cool the house. This means reduced costs for residents at a time when energy costs around the world are rising.  In a project in Central Australia – Warm Houses in Cold Climates, HH was able to demonstrate similar results, using simple passive design modifications to existing houses, increasing the internal temperature of houses by up to 10 °C.

The other major aim of this project was to reduce the inhalation of smoke from cooking on open fires. Similar to HH’s work in Nepal where biogas from toilet waste was used as an alternate to burning timber, Grupo PUCP has developed an alternate solution to open fires that uses a simple clay fireplace and cast iron plate that expels smoke and reduces smoke inhalation, proving a key factor in reducing respiratory illness in the region.

Clean warm houses should not be a luxury – bravo to all involved!

The Overcoming Indigenous Disadvantage 2020 report was released in December by the productivity commission. The report measures the wellbeing of Aboriginal and Torres Strait Islander people against 52...