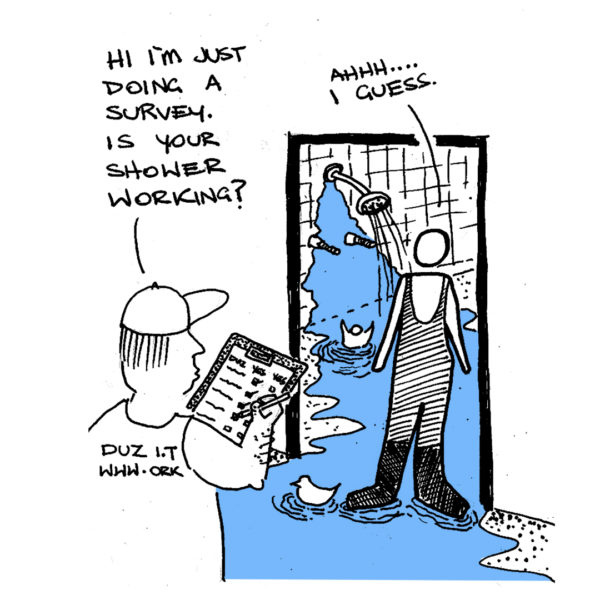 Healthabitat suggests the NATSIHS survey which forms some of the data used in the Overcoming Indigenous Disadvantage report could use some tweaking.

The Overcoming Indigenous Disadvantage 2020 report was released in December by the productivity commission. The report measures the wellbeing of Aboriginal and Torres Strait Islander people against 52 indicators across a range of areas including governance, leadership and culture, early childhood, education, economic participation, health, home environment and safe and supportive communities.

There are some encouraging signs buried in the 4000+ page document, plus a few tweaks that Healthabitat would suggest.

The report addresses three aspects of the home environment;

Safe and secure housing is essential for people’s wellbeing. Overcrowded housing can have detrimental effects on health, education and social outcomes, including by jeopardising personal safety and security.

Overcrowding is measured using the Canadian National Occupancy Standard (CNOS) which essentially uses room number as the key measure. Healthabitat would like to see house function included as a key indicator, as house size alone does not improve overcrowding. Healthabitat has written about solutions to overcrowding before.

Overcrowding and poor housing quality (including poor health hardware) are linked to higher rates of environmental health diseases. Overcrowding can lead to deterioration in housing quality and breakdown in household facilities (such as toilets and washing machines) that are important for maintaining good hygiene (Ali, Foster and Hall 2018). Overcrowded and poor quality housing have been linked with higher rates of gastrointestinal, skin, ear, eye, and respiratory illnesses for Aboriginal and Torres Strait Islander people (Ali, Foster and Hall 2018; May, Bowen and Carapetis 2016). Furthermore, overcrowding can mean that infectious diseases, once present in a community, can circulate more rapidly (May, Bowen and Carapetis 2016).

It is heartening to see house function and health linked as well as regular maintenance of good quality health hardware as part of the discussion. Healthabitat hopes to see this as part of future work in Aboriginal housing.

Access to clean water and functional sewerage and electricity services 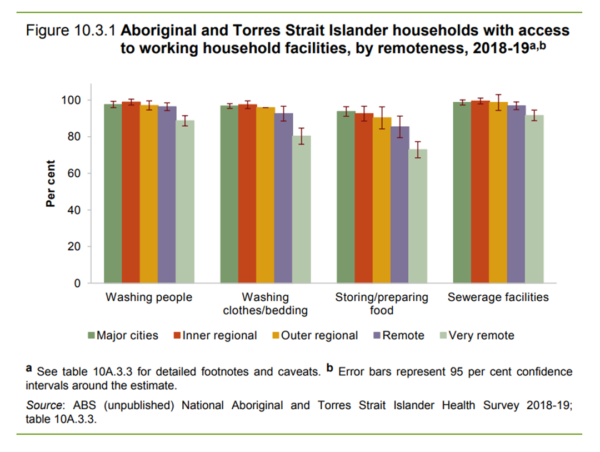 Healthabitat agrees with the first point above, however, the NATSIHS survey might need a second look. Above is the graph provided showing “working” household facilities. Access to facilities for washing people is, at it’s lowest, about 90% from about 350 houses based on asking residents. Healthabitat’s data from over 9300+ houses nationally shows that before a Housing for Health program only 38% of houses had a working shower. This is based on local teams physically testing the shower taps, shower rose, water pressure and drainage. Perhaps the NATSIHS surveyors were lucky enough to go to houses that had recently had a Housing for Health program completed where the function of facilities to wash people is up to 88%. 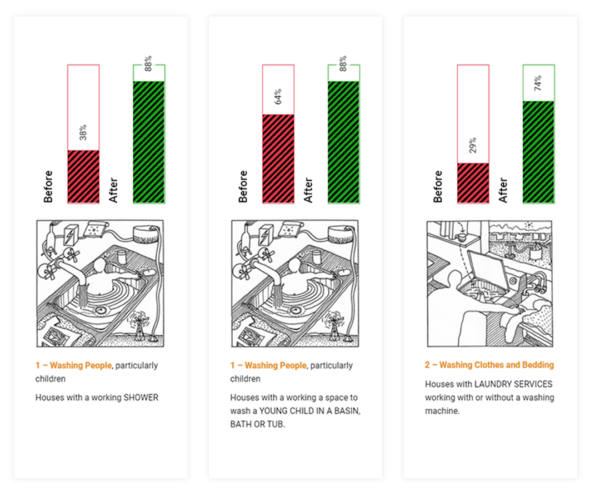 Data from all 9300+ houses nationally that Healthabitat has surveyed since 1999. This data is collected using a standard test of over 250 items in each house. It does not rely on anecdotal evidence that washing facilities work but physically tests taps, drainage, water pressure and water temperature.

Healthabitat would suggest that the NATSIHS data should be reviewed based on testing health hardware rather than relying on anecdotal evidence from open-ended questions open to interpretation. There is still a long way to go to improve Indigenous housing in this country, Healthabitat looks forward to seeing real change for our Indigenous communities Australia wide.