The horrendous impact of the failed nuclear plant at Fukushima is now well known.

Lessons for rural and remote indigenous housing in Australia may be not so far removed from the major disaster in Japan after all. 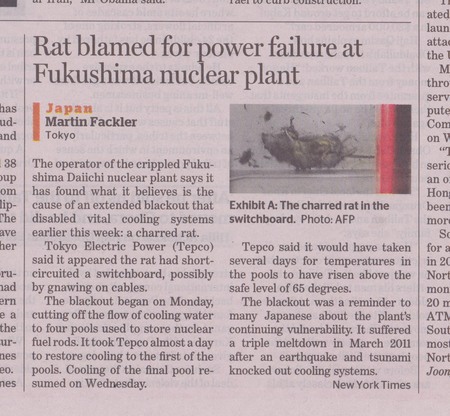 As written in the introduction of the Part A Safety section of the National Indigenous Housing Guide (3rd edition). Check section A1.3 for even more detail about the problem.

Electrical faults may also lead to fires and data show that only 45 percent of houses had all power points testing OK.
The combined impact of vermin and electrical cables can increase fire risk and data show that mice and rats were present in almost 50 per


Mice and rats cause damage to electrical cables and to appliances such as hot water systems, refrigerators and stoves.


To the above could be added

…mice and rats were present in almost 50 percent of houses… and nuclear power plants.


Mice and rats cause damage to electrical cables and to appliances such as hot water systems, refrigerators and stoves…. and nuclear power plants.


Managers of Housing for Health projects regularly find mice and rats killed by chewing, once too often, on electrical cabling. Sometimes they have brought the evidence to a Manager’s Meeting for all to see.