The forth annual Nepal Sanitation Studio is a week into the thick of it. Paul Pholeros and Sandra Meihubers had both built a steady momentum with the teams on the ground to ensure the day would come when the projects could continue being led by generations of students involved in the program, as is the case this time.

Below are the first two instalments from UoN Architecture Student (and catalyst for the Sanitation Studios) Owen Kelly who is assisting Nepal building codes and earthquake construction expert Catherine Forbes on the ground.

In typical HH style a diverse group of plumbers, engineers, construction managers, architects, teachers and students met at the kathmandu airport hotel on a hazy morning. Most of the crew found out the devastating news of Paul Pholeros’ passing that morning. However there was unanimous concensus to continue on with the projects. Paul will be sorely missed as a mentor, inspiration and pillar of strength and knowledge to people from all parts of the world.

The (re)construction team has started work on a construction manual for a system to rebuilt traditional style housing for some of the people most desperately in need of help in a earthquake resistant way.

[We started by] inspecting the proposed house sites which already had the house foundations built. On initial inspection the foundations were too narrow and of unknown depth. The construction of the footing varied between mud and stone and cement and stone. Too many unknowns for safe construction.

After much discussion with home owners, HH and the engineer we have decided on a prototype house.

Today the stonemasons arrived on site to begin footings on the prototype house. The team have been working on a construction manual to communicate how to construct the earthquake resistant house.

Time to test the manual. 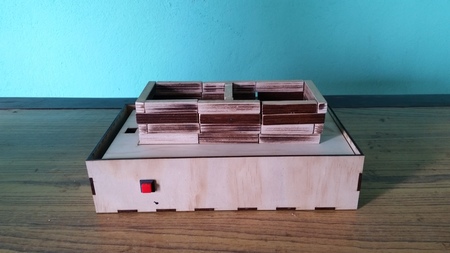 Photo: Model being used on site 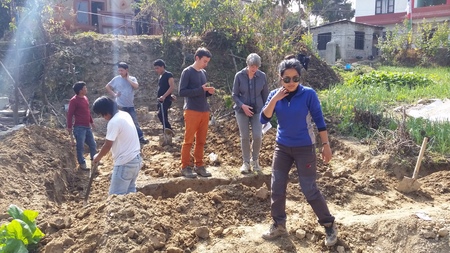 Work is happening. Foundations holes are half done.

The current site we are working on is a new build on Prem’s* land. He has agreed verbally to build it as HH has specified. However the design is one room with a nib wall to show the “t” junction. It is not true to the HH design. Basically a half house.
Prem has agreed to fund this himself plus the money from HH.

This was chosen because:

Hopefully we should have a good example of the construction process by the 10th.

Group is working well. Sometimes hard to keep clear direction with a diverse skill base. Some people feeling a bit unsure of what to do. Decisions are tough with minimal experience in Nepali ways, discussions, work ethic and teams as well as engineering.

I understand we are trying to build the plans to spec but some issues about existing footings and slope are beyond our knowledge base.
In addition to this, sometimes the importance of reproducing traditional or heritage housing seems to dominate the discussion.

Moral is high today, we have a direction.

On the first day of the studio commencement, Paul Pholeros AM passed away (Feb 1st) in Sydney. It was agreed by participants at the initial briefing meeting in Kathmandu to continue the studios and re...