Community Plumbing Challenge 2017 to be held in Indonesia

The International Association of Plumbing and Mechanical Officials (IAPMO) are longtime Healthabitat and HH O/S partners. Many projects have been brought to life by IAPMO contributions and technical support. Recently IAPMO launched iWSH (International Water Safety and Hygiene) – an organisation that brings together the expertise and resources of the global plumbing community.

Clean water and sanitation are inalienable human rights that govern the quality of life of every community around the globe. iWSH has sought to highlight the widespread violation of these rights through lack of access to basic sanitation facilities, most notably through their Community Plumbing Challenges that are held annually in a different community around the world. Healthabitat has been involved in previous Challenges held in India and South Africa, that lead to concrete improvements in each community providing access to safe drinking water, functioning toilets and the technical training of local residents. 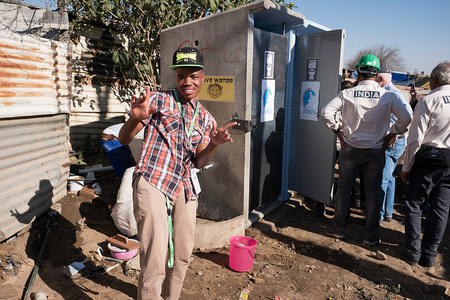 The location for this year’s event has been announced as Cicau Village in Cikarang, Indonesia. Russ Chaney – CEO of IAPMO – announced the venue, adding: “The Community Plumbing Challenge targets direct impact in the heart of communities where water systems are unsafe or unsustainable.” The Challenges function as a key way in which iWSH mobilises other international organisations and forms partnerships with actors working across the water, sanitation and hygiene sector.

Leading apprentices and professionals representing up to five countries, including Indonesia, are expected to participate in the event in order to deliver improved hygiene and sanitation facilities to the Cicau area. This year sees the Challenge being split into two weeks across the year. The first is the “Design Week” to be held in August, the second is the “Construction Week” planned for November. Given the depth of technical ability and dedication that the events have attracted in the past, Healthabitat looks forward to the outcomes of this year’s Challenge and will bring updates as they unfold.

Plumbers and health - what a good idea

Whether in Australia, Nepal, Bangladesh or South Africa, Healthabitat needs little convincing about how the work of plumbers contributes to improving health. So it is a great leap forward to see th...