With the largest ever national Indigenous housing program (The National Partnership Agreement on Remote Indigenous Housing) being rolled out there is the promise that housing and health will improve by 2017. This will rely not on the number of houses produced BUT on their ability to function and provide services to those who live in them. A working shower is one of the most important health-giving services of any house (washing people is the highest Healthy Living Practice).

Healthabitat believes that current Australian government policies combined with state government delivery of both new and upgraded houses give no great optimism for the 2017 results. The current Australian government policy obsession with number of houses built (or upgraded)  and the state government implementation of the national program that seems disinterested in housing history, house function or health will lead finally to a large number of non- functioning houses. This approach is strikingly similar to the 1980s where the final act of the tragedy was the blaming of Indigenous tenants for the housing failures.  This brief discussion is based on facts derived from the national Housing for Health program over the last 12 years. Healthabitat invites a public debate on any of the points covered briefly below explaining first why we think house function and shower function will fall over the next 5 years and then the simple, proven actions that would improve house function over the same period. We think this is a BIG ISSUE. The link between health and housing is being ignored. The NSW Health review of the health impact of 10 years of Housing for Health work in New South Wales, released in 2010 has been ignored by all states except NSW. The Australian government has also ignored the finding that simple, modest improvements in the living environment, with an average cost of $11,000 per house has reduced hospital separation rates by 40%. Also ignored was the important fact that the work was achieved with 75% of the total workforce being local Indigenous people

The National Indigenous Housing Guide is supposedly a required compliance document of The National Partnership Agreement on Remote Indigenous Housing. There is little evidence in the completed project that the Guide was used. The 3rd edition of the Guide was due to be reviewed in 2009 (as had occurred regularly since the first edition in 1999). The review has never taken place despite supposedly being a high priority. Perhaps the principles described and previously agreed by ALL Australian governments are now too onerous to be upheld and it would be better for The Guide to disappear.

Healthabitat believes there is currently no standard national assessment of completed new or upgraded houses. Despite assurances from states and FaHCSIA over the last 2 years that thorough quality assurance procedures are in place,  no testing results or reports have ever been forwarded to communities when requested. Houses tested by Healthabitat have failed basic safety and health function tests. Surely the house assessments, if they exist, can be produced for participating communities.

The obsession with house build numbers and ignorance of house function means that infrastructure has not been integrated with the large national housing program. New houses have been completed with no power, water or waste services connected. If houses are conceived as providers of health services, then the infrastructure to ensure house function becomes critical to the definition of a house.

Given these current directions, Healthabitat predicts that housing function and health will decline by 2017.

Improved policy and future action has been well defined by practice proven over the last 27 years. 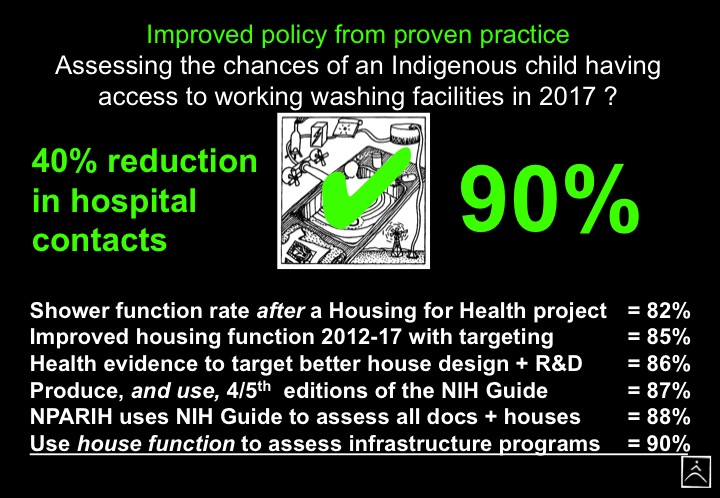 Methods and tools developed in the Housing for Health program to better target money and resources to high priority safety and health targets, for example improving shower function, have raised the shower function improvement rate from 40% before fix work to 72% after fix work in 1999 to 82% (from a base function rate of 35% as noted above) in 2011. Further attention to this targeting detail will continue to improve function rates.

Consolidated housing data, now available from over 7,300 houses improved nationally by the Housing for Health program, is essential to inform the 4th edition of the National Indigenous Housing Guide. This 4th edition should be produced in 2012 and then be reviewed in preparation for the 5th edition in 2014. If the Australian government cannot complete this work by June 2012, the Guide should be reviewed, improved and electronically published by a private organisation, NGO or agency.

The National Indigenous Housing Guide will not improve houses by sitting on a bookshelf or being stored on a hard drive. The Guide should be used to inform and assess design documents and most importantly be used as the testing tool for all completed houses, both new and upgraded. A Guide assessment tool currently exists for the checking of design documents and the Housing for Health survey process is the nationally accepted measure of house function based on the Guide. The tools exist and they should be used now.

Infrastructure, such as power water and wastewater services, is essential for houses to function. Assessing infrastructure as delivered to the residents of a house will ensure that health benefits are being provided. It is not water in the new pipe under the road that improves health, it is the water coming out of the shower rose and washing the child.

Improving the chances of an Indigenous child having the working facilities in a house to have a wash in 2017 may appear simple or insignificant in the shadow of major Constitutional reform and the global financial crisis, but we reckon a working shower is the final test of all the complex policy and systems that impact on Indigenous people’s lives.

Indigenous children and families around Australia think this is a big issue.