Home » News » General » “We shall deal here with humble things”

“We shall deal here with humble things”

Barbara Penner has written an article on the importance and philosophy of wastewater and sanitation. A critical Healthy Living Practice is removing wastewater safely and this has been a constant challenge in Australia and more recently New York  and Nepal. Some extracts are set out below but we suggest you read the whole story by using the link at the end of this page. 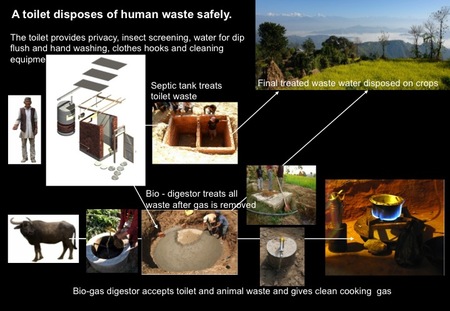 As is well understood, it was only as a result of devastating outbreaks of cholera and typhoid in the 19th century that governments began to take serious responsibility for sanitation and to fund the construction of sewers. And ever since theories about hygiene have influenced the appearance and maintenance of the bathroom and its fittings. Just consider the shift from the richly furnished bathroom of the Victorian period to the spare, bright white and almost clinical one of the early 20th century; all in the cause of better exposing and eradicating dirt — and expressing a cultural commitment to doing so.

Today no fewer than 2.6 billion people are estimated to lack access to basic sanitation; 5,000 children are still reported to die every day of diarrheal diseases, deaths that basic sanitation could do much to prevent.

Such shocking figures have served to nudge sanitation higher up on the agenda of the international development community. The United Nations’ Millennium Development Goals, for example, has set the target of halving the number of people without basic sanitation by 2015. Although this goal still looks very far away (and, in 2010, the UN admitted that it was the most off-track of all its targets), the field of sanitation has lately been energized by the arrival of new champions with fresh approaches.

Long one of the most unloved and moribund areas of government sponsorship and NGO support, sanitation now has the strong backing of organizations from the World Toilet Organization to WaterAid, and recently the Bill and Melinda Gates Foundation has thrown its considerable heft behind the cause through the “Reinvent the Toilet” challenge.

Update on the latest CPC at Navajo Mountain, USA. Healthabitat and long term partners IAPMO have officially wrapped up, the CPC (Community Plumbing Challenge): Navajo Mountain in Arizona. This saw plumbers and other trades invited into tough places not just to write reports but to actually get their hands dirty and improve the living environment in tough situations.