The Anganwadi Project: A Ripple Effect

Emma Leckie and Ellie Gutman on designing with communtiy.

HH has long been a supporter of the Anganwadi Project. Two of the participants have written about their experience in India, working closely with a local community to design a school on an awkward piece of land. Their approach to the community, local materials and humility are commendable. HH says Bravo!.

By Emma Leckie and Ellie Gutman In 2019, we spent six months volunteering as Architects with The Anganwadi Project (TAP) in Ahmedabad, India as part of a cross-cultural team, to design and oversee the construction of an Anganwadi.

Anganwadis are preschool centers originally established across India in 1975 to address child malnutrition. The role of an Anganwadi is to provide one nutritious meal each day to children under 6 years old, as well as lessons in health, hygiene and literacy, however, in practice they do much more.

A year on from completing this project, as Australia slowly begins to emerge from the cocoon of Covid 19, it is a timely reminder of the impact one small building can have on its community, and the power a group of committed individuals have to instigate change.

From the moment we entered their world, the local children warmed to us, through simple, non-verbal acts of playing, learning names, and practicing secret handshakes. Showing up everyday with a smile on our faces, making an effort with the local language and working collaboratively alongside local volunteers, teachers, builders and engineers, the respect of the parents and with wider community grew. 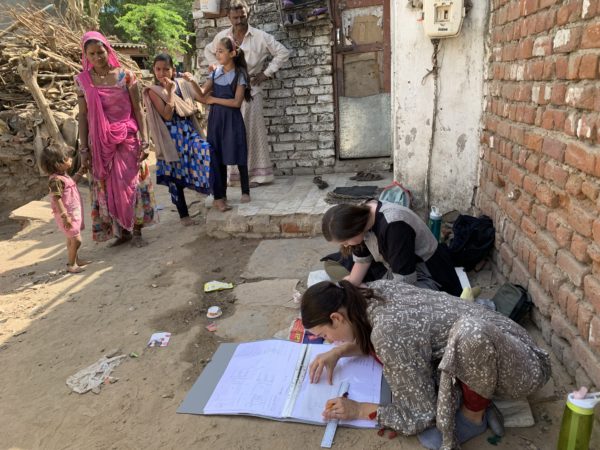 Instilling a sense of community ownership is fundamental to the TAP approach, with volunteers on the ground and working closely with the community from before the seeds of the project are planted until the building is completed. 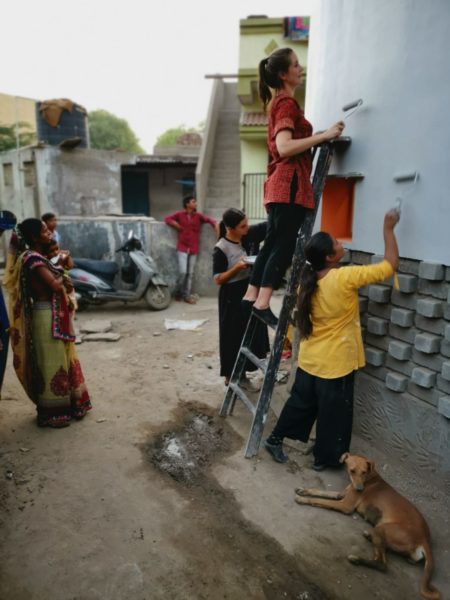 Early in the design stage, we presented drawings and models (which, for ease of communication were so detailed they almost resembled dollhouses) of the proposed design to the local community and project stakeholders. After the workshop was over, we were walking out of the community with Snehaben, the teacher of our preschool, and we bumped into a few other Anganwadi teachers.
Snehaben took the model from us, and proceeded to present the design to the other teachers, down to the detail “this is my kitchen, this is where the children will put their shoes, etc.” This exchange showed us that Snehaben had felt heard, that she understood the scheme, where her feedback had been incorporated, and she already envisioned teaching in her new space. 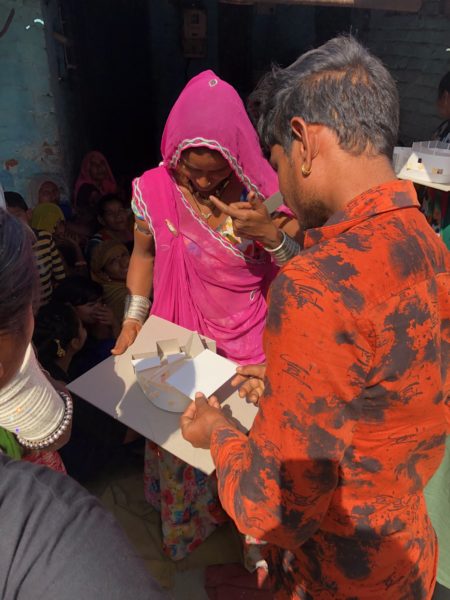 The philosophy of Reduce, Re-Use, Re-Cycle and a focus on local construction techniques and materials underpin the TAP design process. This results in inevitable two-way knowledge exchange, and the opportunity for local labourers to be upskilled. The colourful floor tiles for the courtyard were chosen as they were made by another stigmatised community through workshops held by local Architect Sealab. The inclusion of these tiles enabled the project to support this initiative and provided an opportunity for the teacher to participate in their making. 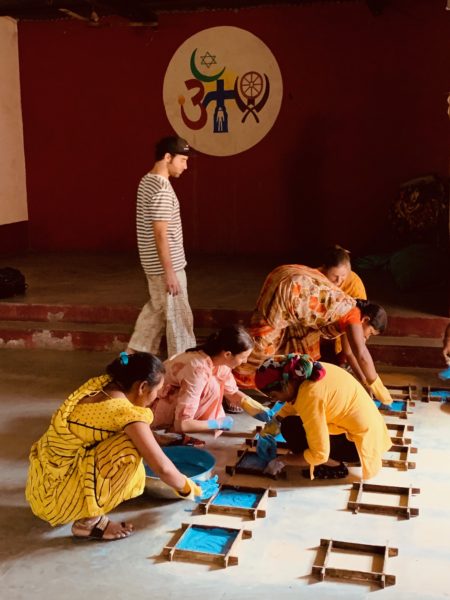 Unexpectedly, the act of laying the tiles was as powerful as that of making them. The tiles were delivered to site by rickshaw late in the evening, after a long and very hot day on-site, the day before the inauguration, so we worked into the night to lay them. Initially, the TAP team of three formed a human chain, running back and forth to pass the tiles from the rickshaw to the courtyard where Manubhai, our builder, was laying them. Within minutes, a couple of local children had joined the chain, and soon it was so populated we were almost on top of one another, yelling “red,” “green,” “yellow,” or “blue,” as we selected the appropriate colour. 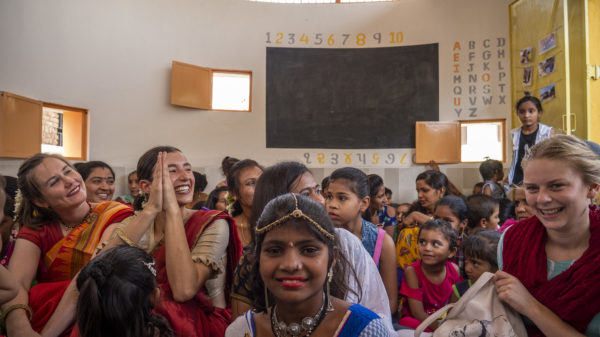 On the day of the inauguration, we met on site early to give the Anganwadi a final clean and prepare some decorations for the celebration. We arrived that day like we had every day for the three month construction period, feeling that we were there to work on our Anganwadi. However, when the inauguration celebration was complete, there was an unspoken yet palpable feeling that the building belonged to Snehaben and the community. Our motivation for doing this project was ‘to give back’ however despite giving everything we physically and emotionally could, we felt that we gained far more than we gave. Working alongside some very strong locals – predominantly women – we were often thrown into challenging situations and we found immense power in believing in each other to the point where we had no choice but to believe in ourselves.

In a society in which women are still learning about their self-worth, our strong female team came to be impactful in and of itself. Towards the end of the project, Rikita (local architecture student and volunteer) overheard many women in the community talking about how three women had made this building come together, and they had learned that “if they can do it, then we can do it too”. We went to Ahmedabad to create an Anganwadi, but it became very clear that the building itself was only a small piece of what was left behind. Ingrained with the many hands that have touched it, both figuratively and literally, this little building will have far-reaching impact. 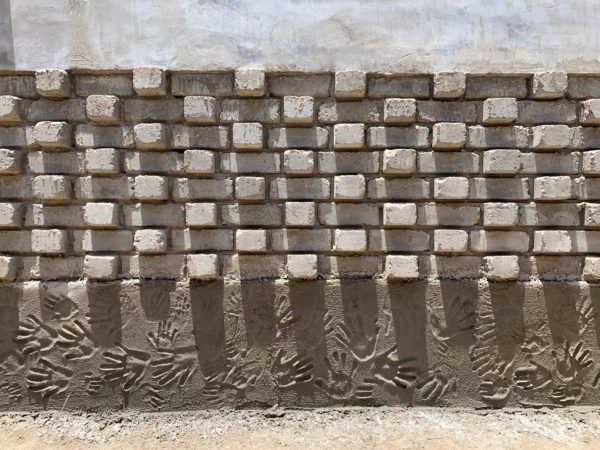 Referred to by many locals as a good luck charm for the community, this Anganwadi, built to provide 40 children with a space to learn, will conservatively touch the lives of hundreds of people. The ripple effect of their influence can be felt throughout an entire community. For us, this is a powerful reminder that:

“You may never know what results come of your actions, but if you do nothing, there will be no results.” Mahatma Gandhi