He worked on the original Housing for Health project in Pipalyatjara and never stopped working on the same principles as a UPK environmental health officer for the APY Lands, in the north west of South Australia. 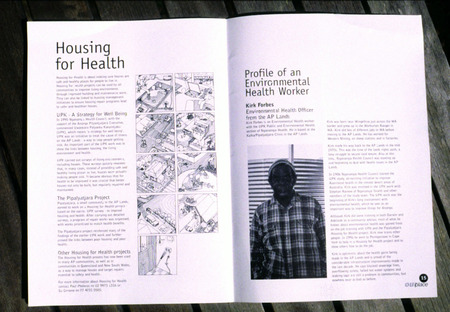 He was on the team of the first Queensland Housing for Health pilot project, in Pormpuraaw Cape York, and became a celebrity in the eyes of the locals with his extensive housing knowledge.

He was a key member of the Nganampa Health Council and University of Wollongong research and development team improving the function of wastewater systems in central Australia. At the presentation of the final wastewater report to the Vice Chancellor of the University of Wollongong he noted in his brief address to the assembled academics and professionals – ‘the families involved in this work knew that the work would ultimately lead to better health for their kids and were happy to help, they also hope the work can lead to the better health of kids around Australia’. The work went on to change state and national wastewater codes and to improve wastewater treatment.

He was invited, by the then Housing Minister Jocelyn Newman, to the launch of the first edition of the National Indigenous Housing Guide in Canberra. He, more than most, understood the importance of the work that underpinned the principles of the Guide. He had lived the work.

This quiet, considered and gentle man with his great sense of humour was a mentor and friend to many. His work was important and improved the living conditions of his local community, the region he knew so well and for Indigenous people nationally.

PP for all of Healthabitat
* Anangu (aboriginal people) in the region prefer the name of a recently deceased person not be used for a period of time, Kumanara is substituted.