Water Innovation Challenge Day 3 and the winner is …

A hectic Day 3 of the inaugural Water Innovation Challenge, and a very close final result, showed the skill and effort of both teams.

After the construction works of the previous days, the final (half) day of work concentrated on completing  the sanitation design proposals for Nepal and the proposals for Bangladesh that had been submitted previously.

This involved the teams in research, design drawings, costings (based on know materials and labour costs in each country) and construction and maintenance manuals to ensure the continued function of the systems designed. This was a monumental task to ask of even the most skilled and experienced professionals.

Presentations by the teams of both the Nepal and Bangladesh designs occurred in the afternoon and the assessors considered the work and determined the final scores. (see the Design reports from both teams by clicking on the team name here TEAM USA , TEAM AUSTRALIA

And if this was not enough a final water pumping challenge (which became 2 challenges) was combined with our young school student volunteer film makers interviewing all involved.

The results were announced at a dinner, held at the New Water plant near the competition venue. This is a facility where waste water is recycled to drink quality. Treated water accompanied the dinner. 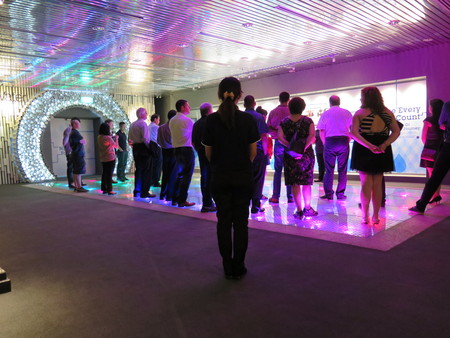 Walking through the exhibition area of the New Water facility in Singapore.

HH extends thanks to all the organisers, partners and participants of this event. In particular the leaders and staff of ITE, particularly Bruce Poh who hosted an ITE dinner, WorldSkills Foundation, IAPMO, World Plumbing Council and RMIT.

As an inaugural event many have worked and planned to try and prove the value of the concept of multi-skilled teams working or ‘real’ problems. Particular thanks to Event manager – Grant Stewart and the organising team of Nuria Portland, Grace Lung, Geoff Ball and Seán Kearney.

And then there were the assessors along with HH – Stewart Henry, team leaders Bill Erickson (USA) and Dr Helen Smith (Australia) and Grant Stewart. And working hard on the floor were the Team ‘pit crews’…apologies in advance to all who have not been mentioned.

All those participating on the two teams went well outside their normal comfort zone and all remarked on how much had been learnt.

HH put a request to the WorldSkills Foundation Chair, Tjerk Dusseldorp, to support all the competitors to work on a real HH project to ‘close the circle’ and see the impact of their skills and effort on a real community.  HH has its fingers crossed that this can be supported and project work scheduled.

Keep viewing the news items for comments on the design results.