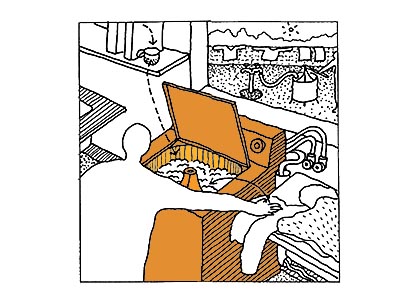 Washing Clothes and Bedding is the 2nd HLP as the regular washing of clothes and bedding, helps to remove any bacteria, dirt, fleas, mites and other irritants or infection.

Why are washing machines so important?

Chronic and recurrent skin infection is a major health problem for young Aboriginal children. Endemic scabies causes constant discomfort to children and predisposes them to infection with bacteria, particularly Group A streptococci. This bacterium is most frequently found in children with impetigo (skin sores) (Van Buynder 1992). Infection with this organism has been clearly shown to predispose to the subsequent development of kidney disease in the form of post-streptococcal glomerulonephritis. In addition, other childhood infections may contribute to the development of long-term kidney disease.
Renal disease is much more common in Aborigines than in non-Aboriginal Australians. Chronic renal failure has been estimated to occur ten times more frequently in South Australian Aborigines than in the overall Australian population (Grime 1988). In the Northern Territory (NT) Aborigines reach end-stage renal failure much more commonly than do non-Aboriginal Australians (Disney 1992). Streptococcal infection of the skin may also contribute to later development of rheumatic fever. Rheumatic fever and rheumatic heart disease are extremely rare in non-Aboriginal Australia. Hospital separation rates (an index of hospitalisation rate )for rheumatic fever and rheumatic heart disease are twenty times greater for Aborigines than for non-Aborigines in the NT (Devanesen 1986). Deaths from these conditions are many times higher for Aborigines. In central Australia, it is estimated that the annual incidence of rheumatic fever is 815 per 1,000 000 (Brennan 1990).

The UPK Report (1987) developed a prioritised list of nine Healthy Living Practices. The capacity for people to wash their clothes and bedding was the second highest priority due to it’s potential to impact on the prevalence of the infectious diseases especially skin infection.
During the course of the Review, the team noted many different makes and models of unserviceable washing machines. Many of these machines did not have the capacity to wash blankets.
In 1994 NHC- UPK commissioned an industrial designer to research an appropriate washing machine for the APY Lands. It was determined that a top-loading Speed Queen that could wash both clothes and bedding would be the most suitable for the harsh environment and potential high use. This information was presented to the Aboriginal Housing Board and a decision was made to supply these machines and include them in the cyclical maintenance contracts.
In 1996 NHC-UPK commissioned the Centre for Appropriate Technology (CAT) to prepare a report on usage rates, maintenance issues and life cycle issues. This report found that the machines were highly prized and used enthusiastically (Amata 3.5 hrs/day Pipalyatjara 6.0 hrs/day).

Currently, I have been advised that South Australia Housing are not supplying prescribed washing machines either as part of the capital cost of the new houses or through a grant for minor upgrades as was the case in the past.

The old argument of not supplying white goods has been resurrected and talks about no-interest loans for Anangu to buy their own machines have been floated. Australian Bureau of Statistics (ABS) statistics from 2002 show the median individual Anangu weekly income was $160 to $199 clearly making it difficult for people to purchase their own machines. The median individual non-Anangu weekly income was $700 to $799. The end result will be a reduction in peoples capacity to wash their clothes and bedding and if machines are individually purchased a plethora of unsuitable machines of different makes and models, a nightmare for any maintenance system.
There will also be a rise in the level of infectious diseases and an increase in immature age onset of renal disease.

Any new “Anangu Housing Model”, given the medical information available and the constant requests from Anangu particularly mothers for access to washing machines at their place of residence, must insist that a prescribed make of machine be part of the capital cost of the house and be subject to a cyclical maintenance regime.
The cost is negligible compared to the cost and trauma of treating renal disease. I understand that up to 80 new houses are being built which can leave up to 400 to 500 people with no access to a machine. To supply machines for these 80 houses could cost around $120,000.