Healthabitat O/S Ltd is a not-for-profit company aiming to improve and advance the health and standard of living of people living in poverty throughout the world, primarily through facilitating the improving of their housing and surrounding living environment. 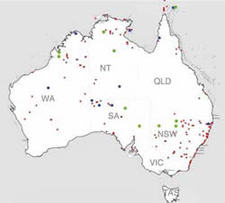 The three directors of HH first met and started working together in 1985, brought together by the challenge set by the then director of Nganampa Health Council, Yami Lester to “stop people getting sick”. As the principles and solutions were developed out of the UPK report, the three formalised their commitment through a not-for-profit partnership, with each partner contributing their professional skills to various projects as needed. Any income not used on the projects was used to defray travel and running costs.

In 1998 Healthabitat became a private Australian company with similar aims and the original partners became directors. They are:

The Directors made a not-for-profit charter which allows the company to trade as a Pty Ltd company, receive fees and government contracts and act as a social business. This structure also enabled Healthabitat to use any profits to develop the Housing for Health methodology and tools, provide seed funds for national research projects and support overseas projects.

Funding for these projects has been supported by donations from individuals, families and organisations. In 2014, Healthabitat decided to establish a not-for-profit subsidiary with charitable status and in 2015 was successful in gaining Charity status from the ACNC and Deductible Gift Status (DGR) from the Australian Tax Office (ATO).

Healthabitat O/S can provide tax-deductibility status to donors and receive donations online for its projects and will remain guided by the methodologies and principles of the Australian work created and managed by HH.

The HH O/S directors selected a team from HH Managers and Directors with a range of skills who can continue the running of projects.

The Board of Directors:

Plus many other contributors, partners and participating communities in Australia and round the world.

Visit the Healthabitat O/S website for more information and to donate online.

For any further enquiries for HH O/S please contact us at info@hho-s.com o

The Overcoming Indigenous Disadvantage 2020 report was released in December by the productivity commission. The report measures the wellbeing of Aboriginal and Torres Strait Islander people against 52...